Fusion is a process used to strengthen your cards. Combined with Boosting and Mastery, card growth has several layers of depth when creating a Final Form (FF) card.

Fusing allows you to remove two identical cards from your collection to create a strengthened version of that card. The final card gains one higher rarity level and is designated with a "+". Depending on if the cards have been boosted or mastered before fusing, the strength of the final card can vary greatly. Final form cards listed in the card catalog are shown as the base stats without any bonus from the base cards.

Most cards will contribute 5% of their current stats to the final card. After fusing, the final card will be Level 1 and will need to be boosted. It should also be noted that if the Ability level of a base card has been increased through boosting, fusion will reset the ability level to 1.

In order to maximize card strength, a card should be boosted to its maximum level and fully mastered before fusing it to the next rarity. Cards that are fused at maximum level provide 10% of their current stats to the final card instead of the usual 5%. While maximizing mastery provides a direct boost to the cards, during fusion it also contributes a boost to the mastery of the final card equal to its current level.

At current time this pertains to only [Secret Agent] Black Widow, [Chosen One] Jean Grey, [Fundamental Forces] Invisible Woman, [Beautiful Genius Commander] Maria Hill, and [Extremis] Iron Man as they are the only cards with more than a single fusion. The strategy names come from the number of base cards used in the fusions and the number of cards maxed during the fusions. 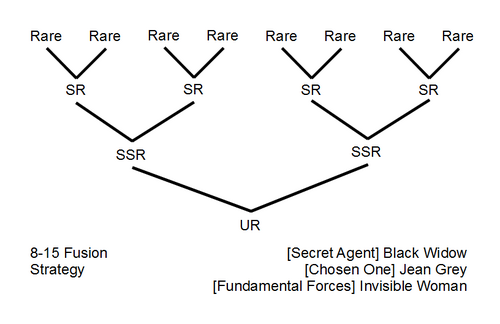 This fusion strategy provides the highest possible stats for every single fusion by maxing all cards in both level and mastery before fusing them to the next level. Essentially 8 rares are used to make 4 SR cards to make 2 SSR cards to make 1 UR card (15 cards total).

The cost of fusing two cards is determined by the level of the cards, and also by which order you choose to do so in, if they're not of the same level, giving a range of costs.

Retrieved from "https://marvel-war-of-heroes.fandom.com/wiki/Fusion?oldid=91193"
Community content is available under CC-BY-SA unless otherwise noted.